This is not about conference keynotes and sessions. I went to all the keynotes and some sessions and you can peruse and listen again at https://portland2013.drupal.org/. If I was to pick just one that people were still talking about 3 days later and will be influential beyond the con… this is it.

This is about what I enjoy at Drupalcons and why I keep coming back.

For me the highlight of any Drupal meetup, camp, con, sprint or whatever, is the chance to work with and chat to amazing people. IRC and the issue queues are fantastic tools but they are no substitute for the common understanding that can come from face-to-face meetings. Especailly when you have the likes of @effulgentsia, @msonnabaum, and @yched to help focus and drive discussions. I learn so much from watching them!

As a core committer there are many patches I enjoy getting in but for shear number of commits at once and bringing new people into the git log the hightlight so far has to be the push during the Friday morning sprint. The response from the Twig team following my post on g.d.o will be the stuff of Drupal legend. Never before have so many frontend developers used XHProf to such effect. That Friday morning I sat down, plugged in my headphones, pressed play on Sun Kill Moon and The Album Leaf's Perils from the Sea and started committing each patch that was part of the mega patch. The plan was to commit one mega-patch but I felt that the team's effort deserved each issue to have an individual commit to give the contributors the credit due… more work for me but nothing like the effort they put it. Thanks Twig team… the reported 900+ people who turned up to your session salute you! 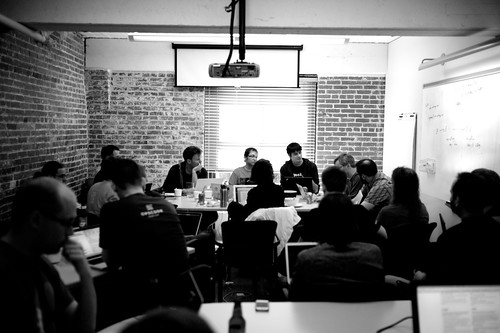 We got to spend six whole days sprinting on Drupal 8 whilst in Portland. Thanks to Acquia for providing for four days in their offices and to Bluehost for the Monday and Friday sprints at conference centre.

As a result of Drupalcon Portland sprints we have a greater understanding about how to join Typed Data and the Field API, how to solve CMI's hard problems, chx's amazing patch to provide a safe upgrade environment by overriding the module handler and a greater expanse of common ground between core developers… roll on drupaldevdays it's going to be our last great chance to get new stuff in!

But Drupalcons are not only about the sprints - they are also a chance to build friendships that can survive an issue queue rant or a posting a minor nit on a @timplunkett 200Kb special and setting the status back to "needs work".

Things get off to a great start on the Friday at the Bunk Bar - @amye's favourite sandwich place in Portland. Sitting at the table reminiscing with @lisarex about meeting her sister in Denver I learn that core committers are the need to be on their toes at Drupalcons… within a minute @jessebeach launches a pint of Portland's finest all over me and then Amye returns to help clean up and somehow a glass comes flying! I'm wet… but it reality this is just preparation for lovely weather Portland has in store for us.

No Drupalcon is complete without spending a serious amount of time in the conference hotel lobby and Portland is no different. The only shame is that hotel bar closed around 11pm everyday but thanks to people like @skwashd we were never short of beer or pizza. Throughout the week there were always people playing games, guitars and ukeleles and even a few writing some code.

I can't complete my reminescences about nightlife in Portland without a special mention of the Doug Fir lounge's hall of mirror's toilets. On the way in you totally lose your spatial awareness; it must be a nightmare drunk.

These are toilets that inspire! https://www.facebook.com/ThePorcelainDiaries

I like food, probably a bit too much :) My highlights:

See you at drupaldevdays and Drupalcon Prague